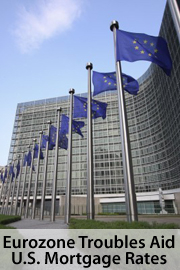 Mortgage markets improved last week as a weakening Eurozone and questions about the U.S. economy sparked a global flight-to-quality. Conforming and FHA mortgage rates improved for the second week in a row.

The storylines should sound familiar by now. They are the same ones that have dictated the path of mortgage rates since April 2011. As a result, according to Freddie Mac, mortgage rates nationwide are now at an all-time low.

Not in 50 years of tracking mortgage rates has pricing been so favorable.

Wall Street held high hopes for Ben Bernanke’s address to the Economic Club of Minnesota, and for the President’s address to a joint session of Congress. It expected Fed Chief Bernanke to reveal clues about the Fed’s next move; and it expected the President to unleash a massive jobs creation program that would put more Americans to work.

Both outcomes would have harmed mortgage rates as money flowed into stocks. However, neither happened. Bernanke kept mum on the Federal Reserve’s options and the White House announced a jobs program smaller in scope than was expected.

Mortgage rates fell throughout the day Thursday then received a big boost Friday.

Amid rumors of a pending Greek default and the potential credit downgrades of several Eurozone banking groups, safe haven buying picked up and drove mortgage rates down.

Markets open this week with rates lower than they’ve ever been in history.

For now, mortgage rates remain at all-time lows and should not be taken for granted. If you see a rate that makes sense for you, consider locking it in.