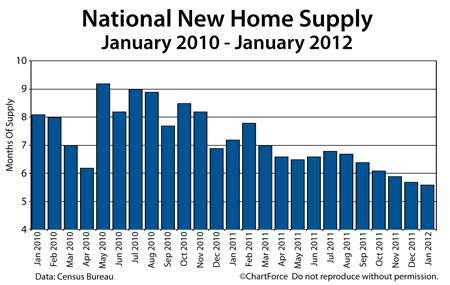 The new construction market rolls on.

As foreshadowed by February’s Homebuilder Confidence survey, which rose to a 4-year high, the Census Bureau reports new homes are selling more quickly than builders have built them, lowering the national “home supply” to levels not seen since 2006.

A “new home” is a home that is considered new construction and, at the current pace of sales, the nation’s entire new home inventory of 151,000 homes would be sold in 5.6 months.

Anything less than 6.0-month supply is thought to connote a “sellers’ market”.

The South Region continues to account for the majority of new construction sales, posting a 59% market share in January. South Region sales were up 9 percent as compared to December. The other 3 regions turned in mixed results.

Although New Home Sales were said to fall by about one percent nationally from December to January, the government’s monthly report was footnoted with a ±16.6% margin of error. This means that the actual New Home Sales reading may have been as high as +15%, or as low as -18%.

Because the range of values includes positive and negative values, the January New Home Sales data is of “zero confidence”. However, that’s not to say that it should be ignored. The aforementioned homebuilder confidence survey shows builders optimistic for the future, and a bevy of home sale data since October 2011 suggests a market in recovery.

If you’re in the market for new construction , therefore, consider going into contract sooner rather than later. Home prices remain low and mortgage rates do, too — a terrific combination for today’s buyers.

In a few months, the landscape may look different. 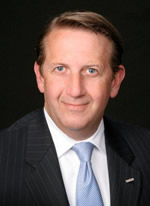